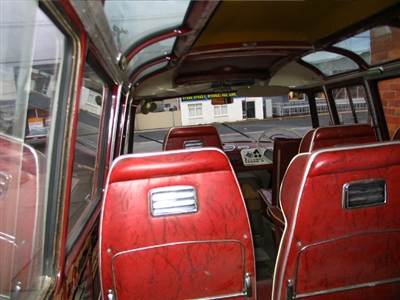 The O319 was available in a number of seating configurations, each with a number of different specifications or options. But basically they came in 10, 17 and 18 seat versions.

Of all the O319's made, reportedly only 961 of them were the 10 seat Luxury version. Most original owners were Motels, Airlines or big business's.

Unfortunately very few survive these days and what does is very sought after by collectors. One theory for them not surviving is that as many were brought by Motels and Airlines they would have all been traded on the newer model in the late 60's/early 70's as they all wanted the latest model to keep up with each other.

As a result of this there were a lot of used ones on the market in the early 70's. Now apparently these 10 seat Luxury versions did not sell well as the market for used small buses was strong for the 17/18 seat version as these could be used as school buses or route busses. But the market for used 10 seat versions was very poor. Obviously 17 paying customers is better than 10!

So what happened to all of them, well the word is that the seats were taken out and they were just sold as plain vans or converted to campervans. I only know of five examples that are left, maybe there are more. If you know any details of these please e-mail me.

Vehicle was restored in Germany and sold to a collector in the united States.
Read More

Rescued from someone who was trying to convert it to a camper van. The rear seat has been lost, but all the other parts are still there. Very well optioned, still has the original Becker radio and interesting things like the…
Read More

The Mercedes-Benz Classic Center based in Fellbach, just outside Stuttgart in Germany have a very neat original O319D 10 seat Coach. There is even a model of this one, but interestingly it shows it as having the 17 seat…
Read More

In terrible condition, but maybe recoverable... I had some pictures of this sent to me a few years back which have been lost, the current owner says: > i found one in swaziland. > it was on its way to reclaim the local…
Read More