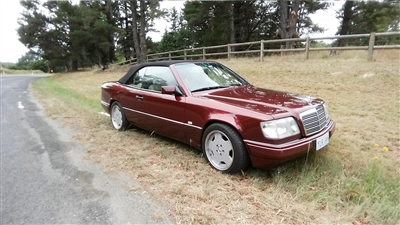 In September 1991 Mercedes-Benz announced the A124 Cabriolet. Production began in 1992, but here in Australia we didn't see our first deliveries until March 1993 when the 320CE coupe and Cabriolet were released. The cabriolet development was based on the Coupé, and in terms of mechanical components the Cabriolets were identical with their four-door counterparts.

After a great investment of engineering know-how, the two-door was prepared for its role as an open-topped car - adequate stiffening of the body alone required the redesign of 1000 parts adding 130 kilograms of additional sheet metal to compensate for the 28 kilograms lost from the Coupé roof.

The fully retractable roof which weighs 43 kilograms and has 27 linkage parts and 34 joints, occupies a mere 80 litres of space. The electrohydraulic actuation system for the top using ten valves and twelve electric limit switches controlled the perfect sequence of three swiveling movements to open and close the roof.

It is thought that around 300 examples of the A124 were delivered new here in Australia. This register was suggested by Andy Wittmann a keen member of the MBCV.

If you own one of these vehicles and would like it recorded on this registry then you need to become a member of our site. This is a very quick process and is required to stop spammers from hitting on us. After you have registered please just click on the link below.

Purchased by MB Spares as trading stock, from the second owner in June 2016 with 142000kms on the odometer. Condition of vehicle was much better than first thought so has been retained by the owners for personal use.  Rare…
Read More