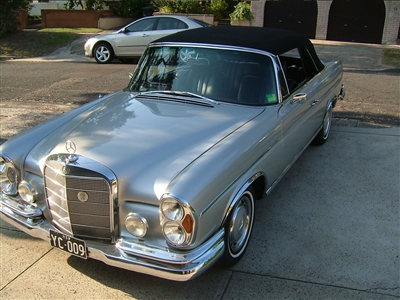 Purchased by Martin Kass in 1988 in Hawaii. Found in a shopping centre carpark by his father -in law. Original owner was supposedly Rex Harrison the actor who sold to Laurence Campbell who retired to Hawaii after living in LA . Car was always RHD. Laurence crashed a airoplane and broke his back and couldnt drive for several years.

His wife didnt drive so the car and it was left in the open at the airport and was very weathered. Purcahsed sight unseen and shipped to Australia. It was faded red with black interior.

Martin fully restored the car over six years and painted the car his favourite scheme silver with black.

In about 1998 I sold it to a chap who spent more money on it as he wanted to be able to drive it hard and fast anytime - he was crazy and drove the car very fast.