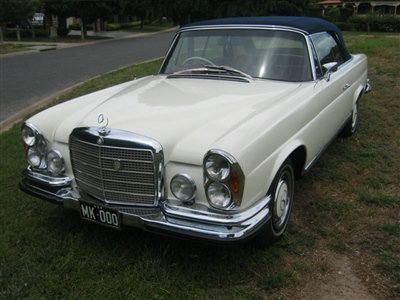 On a trip to Germany in 2005 we came across this 280SE 3.5 cabriolet. The story behind how we found it goes like this.

We were due to fly out at 9.30pm that night after 12 days in Germany, so by mid afternoon it was time to head off to Frankfurt check in our car and say goodbye to Germany. We had a great trip but little did we know it was about to get a whole heap better. If you can remember back to Newsletter No.91 where I had the first instalment of this saga you will remember that we visited a supplier of New Old Stock Mercedes-Benz parts.

Well, while waiting to see the owner, we were patiently waiting in his office where he had a selection of magazines. We picked up what appeared to be a German version of Unique cars and preceded to thumb through it. Even though it was in German you could get the general idea of what was going on. Anyway at the back of the magazine was a small add for a W111 280SE 3.5 cabriolet. Now this is a rare and desirable car, especially when it is RHD and only done 54000kms! (which turned out to be miles) So to cut a long story short, we tried for ten days to contact the owner and had all but given up hope, when on the way back to the airport we get a call from him! All is lost, we think, as we are 50kms from Frankfurt with no time left to spare. But you will never guess what. The owner lives 50kms on the other side of the Frankfurt airport and will bring the car to show us at the airport. Some things are just meant to happen.

The history of the car was that it was sold to the Nigerian government in 1970 and was used for official business. It was twice returned to Germany for servicing. Now any of you who know world history will know that Nigeria fell into a political heap in the early 70's. Somehow the car was sold to the same guy we brought it from and smuggled back to Germany. As it was RHD the new owner drove it very little. Whilst the car does have some minor cosmetic faults it is in amazingly original condition. Negotiations to buy the car have taken over 6 months and it has only recently been placed in a container and is on its way to Australia.

Of all the W111 cabriolets the 3.5 version is by far the rarest in RHD format. There were only 71 RHD vehicles made and only 7 were officially imported to Australia. You may remember that we had one advertised in Newsletter No.80 . So this is a super desirable vehicle for anybody's collection.

The car now has a local owner here in Australia who uses it on a regular basis. We have only had to do some minor cosmetic work on it to preserve it rather than restore it.

- We have replaced all the rubber seals to keep the water and dust out.

- Refinished the timber work to protect it from the sun damage and rot.

- treat the original leather to nourish it and stop cracking.