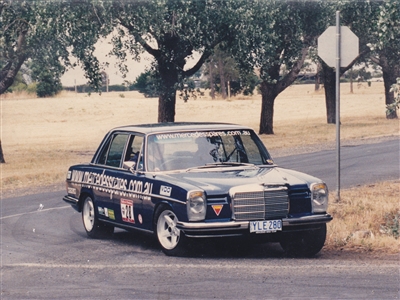 In 1997 we rebuilt a 1972 280E (W114) sedan to compete in Historic Rallies. The car was a great sucess and won the 1998 Rally deBordeaux Concours Outright and came runner up in the following year. It also won various "Engine bay" and "Best Modified" class's at Mercedes-Benz club concours's.

Obviously this was not what Mercedes-Benz had in mind for this car when it left the factory in 1972. It was stripped to a bare shell and has had every single component rebuilt or replaced with a new unit. An expensive project but one with amazing results. It has given us an insight as to what a 280E was like when released back in 1971.

Compare this to what else was on offer from other manufacturers of the time in your country.

All this makes the ideal basis to build a competitive sedan for Historic racing. When deciding which model to use we also took into account the choice of Mercedes-Benz Germany when they entered and won the 1977 London to Sydney Marathon. Of all the models they could have chosen they chose the 280E. I can only presume that they considered the 280E to be the ideal mix of power, fuel consumption handling and reliability.

Here is a list of some of the modifications made and some notes to help you if you have a similar project in mind.

ENGINE
Still under development at this stage. Have made many modifications but are not happy with the outcome. What we are trying to achieve is more power but without making the car hard to drive to the shops to pick up the shopping. It is easy to just put in some wild cams and raise the compression so it will only run on methanol but to get it the way I want it is taking time. Remember what I said about being very smart to improve on the original design.

FUEL INJECTION SYSTEM
The fuel injection system is basically the original Bosh D-jet system. We have fitted either all new or reconditioned components to ensure the system is reliable. We considered using the much simpler/reliable Bosch K-jet system but decided to use the D-jet as it offers much more scope to adjust fuel mixtures and it also kept the vehicle more original. Bosch D-jet is an electronic computerised injection system which is amazing when you consider that this is a 1972 model car we are discussing. The basic design of the system is that a sensor monitors the inlet manifold vacuum and after adjusting it to take into account external atmospheric changes send the signal to the computer. The computer also considers the air temp, coolant, temp and throttle position. After all this is done it tells the injectors how long to open for. The injectors are fired as the inlet valve opens by means of a set of trigger points inside the distributor. The amount of fuel injected is controlled by the opening duration and the fuel pressure. The fuel pressure is controlled by an adjustable mechanical regulator and opening duration is controlled as above. So this make getting more fuel easy. We have the fuel pressure regulated to 2.6 bar instead of the correct factory setting of 2.2bar, fitted injectors from a 450SE engine (7% bigger flow) and have played with the sensors.

TRANSMISSION
Originally the car had an 4spd automatic transmission. (this in it's self was a great transmission and well ahead of its time) But, we needed a manual transmission to make the car more driveable. We purchased a 1978 280S (W116) that was made in South Africa for the wrecking yard. It had a 4spd manual transmission with the correct bell housing for the M110 engine. We replaced all the bearings and synco sleeves before installing it in the car. What I really wanted was a 5spd manual and I had heard that only two of these were imported into Australia in the 70's. Six months after we got the 280E on the road we purchased an old rusty 1972 280E for the wrecking yard with, guess what, a 5spd transmission. I am currently trying to track down some parts to recondition it so I can fit it.

DRIVE SHAFTS
The tailshaft used is from a 250 (W114) manual sedan. The Auto tailshaft is shorter than the manual. We have used the tailshaft couplings from the 280SE W126 as these are the same diameter as the W114 but much stronger. The Rear 1/ 2 shafts are std W114 .

DIFFERENTIAL
The differential used is a real hybrid. The crown wheel and pinion are the only bits used from the original diff. We needed a limited slip diff to improve our traction on slow tight corners and in motorkanas. For the first year we only used a std differential and suffered some major wheel spin problems. It took many hours of research to work out how to do it. We used a late W123 diff housing with a W124/201 limited slip centre and the original W114 crownwheel and pinion. It doesn't just bolt together either. There is a lot of custom engineering in it as well. We also had to cut the thrust washers on the end of the 1/2 shaft in half. This is not easy as they are only 2.5mm to start of with. These could have been left out but are important as they stop the 1/2 shafts from wearing away at the edge of the diff center.

FRONT SUSPENSION
The front suspension control arms are standard. All were fitted with new rubber bushes. A set of custom springs was made for us by a local spring manufacturer. The ride hight is approx 70mm below the standard ride hight. The front sway bar is a standard unit with upgraded bushes to keep it in place.

REAR SUSPENSION
The rear suspension as work of art. We used the aluminium control arm of the 450SE/SL . These bolt straight onto the W114 subframe. However this is the only easy bit. Many hours were spent on the rear sway bar as it also locates the position of the rear wheels.

BRAKES The brakes are one of the most impressive assets of this car. When we came up with the concept off this car we wanted to make it stop as well as GO. The use of the 450 rear suspension arms gave us the advantage of anti dive brakes. As you may be aware most cars will dive at the front under heavy braking. This has the effect of taking the weight off the rear wheels and increasing the chance of loss of traction. The system we have used has the rear wheel caliper mounted forward of the disc rather than behind the disc. It is mounted on a carrier that can rotate slightly around the rear hub and push against an arm that compress's the rear spring to counter the effect of the front springs being compressed. All this means more weight on the rear wheels and less change of a skid. The rear discs and caliper are the standard W114 units.

When we first started out we used the front discs off the W116 model. These are the same width as the W114 280E (but not any other W114 or W115 model) and have the same bolt pattern. They bolt straight on. The advantage is that these discs are ventilated. We also used the W116 calipers. These are the same as the W114 unit just widened to take the ventilated disc. These weren't quite as easy to fit as the discs as we had to make some special banjo bolts to adapt the brake hoses. On the W114 the brake hose goes into the caliper from the side and on the W116 it goes in from the top. After several competition outings we found that we were warping the discs when they got hot. The solution bigger thicker discs. We are now using the front discs off the Late model W126 sedan. these are ??? thicker and ??? wider in diameter.