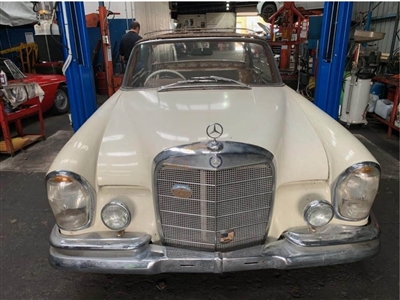 I acquired the project shell and parts from Walter Ventura of Adelaide who had the car for 12 years. He bought it from a WA based person who had imported the car from Washington in the USA. The car was originally made for the UK market.

It has a build no 00007 of all Cabriolets. Perhaps it is the first RHD made ? Enquiries are being made.

The data card is correct on the numbers but the Karosserie (Body ) plate number has a quirky error identifying it as a manual. The data card says it is 112023 22 00007.
The plate is 112023 20 00007 but there is no evidence of manual fitments in the car. The rest of the data card matched the car precisely. There is a second data plate with the chassis number as per the data card.


The car is at Sleeping Beauties in Brisbane an will undergo a complete nut and bolt restoration which is well overdue. It is off to sandblasting as you can see from the photos.

I will update the pictures as the project unfolds.