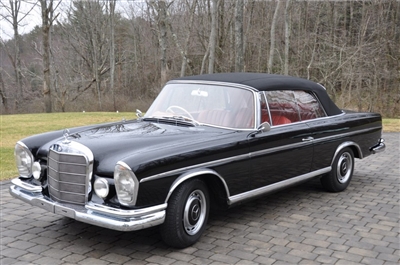 This one was advertised for sale in Pennsylvania, United States on ebay in January 2012.

The auction description was as follows:

You are bidding on a 1962 Mercedes 300SE Cabriolet. The car was built in Germany and made for export to the UK. It started life in South Africa-Sierra Leone as a South African Consulate car. The car was then Purchased from a member of Sierra-Leone Parliament by a Mavhine business in England. The third and last owner is the current owner of the automobile.

The Cab has had one re paint in its original color 040 black. It has also received a new interior and soft top. The wood has also been re done. This car is an air conditioned car, right hand drive, four speed manual transmission. All work has been done to a very high standard.

This is a very original car as you can see by the pictures. There is no rust on the vehicle and it drives extremely well.

This vehicle is for sale locally; I reserve the right to end auction early.

Note the differant front seats and that it is a very rare manual. Also note the mistake in the Chassis number. It was originally advertised as 000273, but it is 007273.