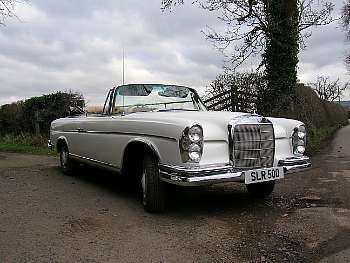 This is a bit of a strange one. The chassis number indicates it as being LHD, but the picture and history indicate it as being RHD. The following was taken from the Motorbase website and was reported to be from a Bonhams auction:

Hidden beneath the beautiful exterior of every Mercedes is the most advanced automobile engineering to be found anywhere in the world. The Mercedes-Benz 300SE Convertible is a case in point. Symbolising luxury, power and the ultimate in sophistication, it is a car that has few equals for elegance and superb styling for sheer technical perfection it is in a class of its own. A thoroughbred in appearance, a tiger in performance, the Mercedes-Benz 300SE Convertible stands alone. Like every Mercedes-Benz it possesses an air of distinction and quality that reflects the unique personality of its fortunate owner. - Mercedes-Benz.
Although Mercedes-Benzs S-Class saloons - first seen at the Frankfurt Auto Show in 1965 - used the so-called �New Generation� bodyshell, the Coup� and Cabriolet kept the timelessly elegant coachwork that had debuted back in 1959 on the 220SE and, as befitted top-of-the-range luxury models, came equipped with air conditioning, electric windows and stereo radio as standard. The 300SE employed a fuel-injected version of Mercedes-Benz�s new, overhead-camshaft, seven-bearing �six� displacing 2,996cc and developing 170bhp (DIN) at 5,400rpm. There was a choice of four-speed manual or automatic transmissions, while the rear suspension featured Mercedes-Benz�s hydro-pneumatic self-levelling system. Thus equipped, the 300SE was good for 120mph, with 60mph reachable in 12 seconds. When the 280SE 3.5 ceased production in 1971, its passing marked the end of this long-established body style. Today all examples of these classic Coup�s and Cabriolets are highly sought after.
The vendor advises us that this right-hand drive 300SE Convertible is believed to have been exported to South Africa at the start of its life. Accompanying documents show that the car was subsequently exported to the USA before arriving in the UK in 2004. Chassis, body and paintwork were restored in August 2004, and since coming to this country the vehicle was been driven regularly, proving to be reliable. An automatic transmission model finished in cream with tan leather interior, the car is offered with restoration invoices and current road fund licence. It should be noted that the current registration mark is being retained by the vendor. A new registration is expected to have been issued together with Swansea V5 by time of sale.