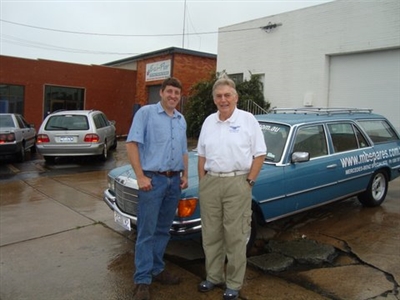 In November 2010 one of the founders of Crayford called into visit me and look at my two Crayford models.

Crayford Auto Developments Ltd was an English coachbuilding operation based in Westerham, Kent, England, and was founded in 1962 by David McMullan and Jeffrey Smith. In 1987 Smith was killed in a motoring incident, and shortly afterward McMullan sold the firm. The company still exists, under different ownership, as Crayford Special Vehicles Ltd, and produces the Argo range of ATVs. Crayford converted Mercedes-Benz cars during the years 1969 to 1980.

It was great to speak with the man behind the idea to produce Mercedes-Benz wagons when there was no such option available directly from Mercedes-Benz.

His inspection of both vechiles confirmed that my 280SEL was indeed converted here in Australia using a kit sent out from the UK and that my 450SEL was converted at his factory in the UK.

Unfortunatly it was pouring rain when he visted so pictures witht he cars was a little tricky..