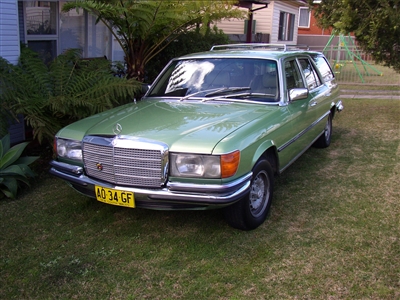 Text supplied by Chris Martin who owned it from 2007-09

Bought 2007 it was registered and running but with several issues to deal with.

The interior responded well to a good clean, but it still needs the headlining replaced. I gave it a tune-up, plugs, fluids and filters and now it runs good with a little oil smoke on a trailing throttle caused by tired valve stem seals. I had the air-con compressor replaced and regassed and the timing chain renewed at the same time.

I also have all parts to reinstall the self-levelling rear suspension as original - next job. I still need to sort the vacuum system for the central locking and am looking for a period correct Becker radio. It is now in daily use, but I will take it off the road next year for a full strip and bare metal respray back to the original Silver Green

First four photos taken 2008, fifth photo from around 2004 when the Old Timer Center owned it.

Vehicle was sold in 2009 to a collector in Malaysia.