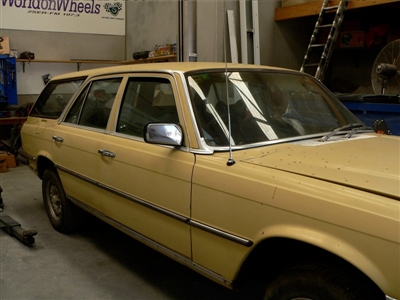 This information supply by Gordon Balfour-Haynes in 2010

This vehicle was purchased by myself in 2007 without engine or transmission. It has had a hard life - and shows it!

The original engine was replaced with another M110 in 1989; since then it has suffered the ignominy of two GM-Holden engines (one straight six and one bent six, so the present owner has been informed). Another M110 is waiting in the wings - once some body work has been completed.

The vehicle was kept in its first owner's garage for a year or so because that owner was afraid to drive it for fear of damaging such an expensive car. (Fool!) He returned it to the dealership, who then sold it to its most illustrious owner: the artist and entertainer, Rolf Harris ("Tie me kangaroo down, sport").

If Harris acquired the car in 1975, it is likely a very early conversion (the date of its Crayford-isation is not yet known, but would seem to be no later than 1974). Crayford didn't start makiing these wagons until 1974; the car left the M-B factory in September '73. There is an article on page 43 of In Aller Welt (Issue #139E, 1/1976) picturing the wagon with Rolf Harris (both looking somewhat younger than they do today).

Since the Harris ownership, it has had at least four owners to the present - and maybe more that are yet to be ascertained.

Like all W116 Crayford wagons, it has stress fractures where the Ford Granada bits attach to the Benz body; these look quite bad, and the bog (oh, the bog!) over those joins is flaking off in hand-sized chunks. Still, this is nothing that cannot be fixed by a competent metal sculptor.

The interior is - carpets aside - in quite good condition. Someone has, unfortunately, added power lifts to the front-door windows - and done an awful job of it. This will be rectified in due course. The dash wood is of the early stepped type rather than the smooth style. It is also quite blond, and doesn't resemble zebrano.

This car - now dubbed der Rolfwagen - is a serious restoration project, and isn't likely to be finished tomorrow.

In 2011 it was sold to Martin Kass who reunited it with the correct engine.