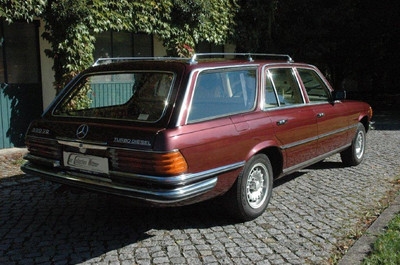 This is the only 300SD conversion that I have come across. I would presume it has been sold new in the USA and then sent to the UK for conversion. It has now found its way to Austria!

Build date on the chassis plate is 01/79 which is a little odd as the production of the W123 series wagon started in late 1977 which was one of the reasons that the market for these converted wagons dried up. Based on this it may not have been converted and then sent back to the USA for registration until 1980 which is when the W126 series was released.

Vehicle was discovered for sale on www.mobile.de in December 2011. It was advertised by CarCollection Franz Wittner GmbH.

Looks to be well optioned with electric windows, sunroof and cruise control. The interior has been enhanced with the Burled Walnut trim for a 6.9 and pleated leather door trims.