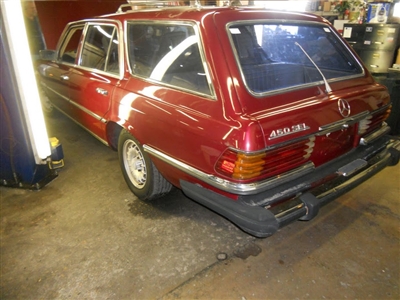 Another red USA specification 450SEL showed up on ebay in May 2011. Listed by the then owner, vehicle was located in Texas USA, with the auction listing claiming that it had been a local car for many years. When it went to form there is unknown.

It has a very unique rear seat design that would have required some redesign of the fuel tank to allow for the rear pasengers foot well.

Pictures on ebay showed it in unrestored condition with some minor rust in the floor area where the modifications were made for the rear passenger foot well.

Once again very highly optioned car. I have developed a theory that if you could afford the conversion back in the Seventies along with the purchase of the vehciel in the foirst place then you had enough money to order all the options also!

In 2013 I received an e-mail with a picture of it being delivered to its new owner in France. (the date on the picture is incorrect)