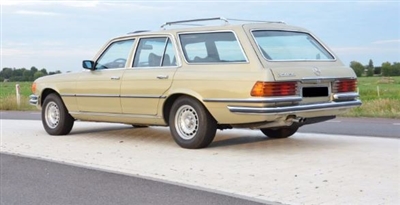 A rare 350SE version of the W16 Crayford wagon, was owned by the President of the Crayford Convertable Car Club for many years before being laid up.

Has been off the road for some time and needs to be restored. We visited in March 2008 and took these pictures.

In 2013 it was sold to Floris de Raadt in Holland who is carrying out a complete restoration on the vehicle including conversion to LHD.

Update pictures of the final result were received in April 2014.

In November 2015 it was auctioned by Artcurial  for 43000 Euro, they described it as follows:

- Rare model
- Carefully restored
- Fast, comfortable and convenient
- One of the 15 built

With just 15 units made, this car was destined for the great people of this world, including Sophia Loren, who ordered one just at its launch and always was accompanied by her five dogs during her personal trips! Purchased in 2012 in England by an enthusiast of sports estates, this Mercedes-Benz S-Class estate bodied by the Crayford workshops had been attacked by corrosion over a large part of the bodywork. The enthusiasm of this passionate collector took over and he started a long and difficult restoration. The body was completely redone, using parts of another Mercedes W116 and of a Ford Granada to get the tailgate right, in accordance with the practice followed by Crayford at that time.


The owner wished to use the car regularly and even decided to switch from right-hand-drive to left-hand-drive, which resulted in major changes: the dashboard and the steering system of course, but also the shifter and center console, as well as the engine compartment with the powerful V8 from the 350 SE. The engine received much attention, with the replacement of the injectors, the fuel, oil and water pump, the filters and the fuel tank. To retain the true history of the car, the owner has kept the original odometer counter in miles, indicating 66,000 miles at the restoration.


This very rare car is a great opportunity to drive a very original car that is both practical as well as a pleasure to use.