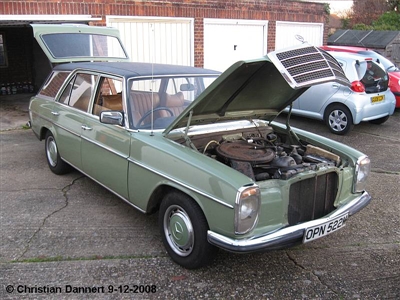 The only known example of the standard wheel base W114/115 conversion known to be currenly in use. According to various word of mouth records this body shape was the most commonly converted and yet only this example survives?

Also thought to be the first of the updated body style converted by Crayford.

A most interesting car with an amazing history. The first owner bought the car from Crayford in 1973 to carry his racing pigeons. He passed the car within his family, and when the head of family was over 80 she simply called the former owner of Crayford - she has got a car that he converted earlier, would he like to have it back?

Used to be owned by Rory Cronin who is the Secratary of the Crayford Car Club in the UK. In 2008 was brought by Christian Dannert from Essen in Germany to add to his collection.

You can find more details here at Christian's Blogspot.