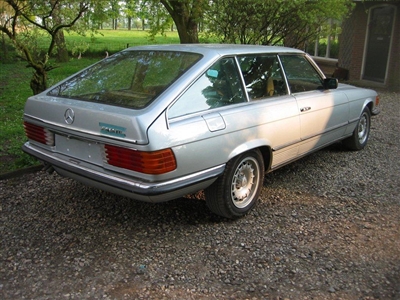 After chasing all over the globe looking for information on this car we received this surprise e-mail in December 2013 from the current owner of the Condor. The story goes like this:

One of the stars of the 1980 Motor Show at the N.E.C was the latest and, as it turned out, the last estate conversion Crayford would produce. It was based on a Mercedes Benz 450 SLC two door sports car, and unlike most Crayford projects, there was no order for the car or a commission for the project from a dealer. But as the Crayford director David McMullan said, you can occasionally go out on a limb and produce a one off special, take it to a Motor Show for ten days, and someone with a blank cheque will always walk up and buy it. Crayford took the 450 SLC 2-door sports car and removed the roof to produce a unique one off 3-door sportswagen in the mode of the Scimitar GTE and Volvo P1800 Estate. The name "Condor" came from the large wing like profile of the open tailgate. It was shown at the Oct 1980 Motor Show on the Crayford stand alongside two other commissions, a open mini beach car for the villa of the head of Bristol St Motors, and an open VW Sirocco with a power hood called "TheTempest", which was commissioned by the VW dealer, Wolfe Garage in Westerham. The main feature of the Condor was its huge one piece glass rear tailgate that also contained a rear washer and wiper arm, gold heating elements, roof hinges, and a boot handle, very much like the glass door fitted to the Volvo P1800 Sportswagen. The car was bought at the Motor Show by a famous heart surgeon who lived in Spain. The car cost £32,000 in 1980, the glass was manufactured by Triplex and was reputed to have cost £10,000 alone.

The Spanish surgeon drove his car around the mountains of Spain with such abandon he crashed the car twice. The first time he fell asleep at the wheel and left the road on a mountain pass, landing up in the top of a tree, the car was returned to Crayfords in England, rebuilt and resprayed in its original metallic green, and a spare glass tailgate fitted. 'We didn't charge him for the glass, how could we', said director David McMullan. 'He had bought the car at the show, paid us to rebuild it and we had the only spare glass for it in the world - Triplex had cast three, two for us and one they kept. The glass cost £10,000 for 3 units.

The owner crashed the car a second time in 1987 just as Crayford director David McMullan was about to sell the company in the wake of his partner, Jeff Smiths death in a road accident. The new owner elect, David Butlion, fell for the wreck and did a deal with its owner, who no doubt sold it spurred on by the fact Crayford had approached The Heritage Museum. They had the one off Motor Show Ogle Triplex GTE Princess, a leyland Princess that was virtually all glass from the waist up, and yes, it used the third condor glass tailgate, and no, Crayford could not borrow it!

So David Butlion, who had come from Bedford trucks at Luton and had Vauxhall dealerships in his portfolio, had the Condor rebuilt around the tailgait of the current 1987 Vauxhall Cavalier. The car still survives today.

If you know anymore about this car or have any pictures please contact me here.