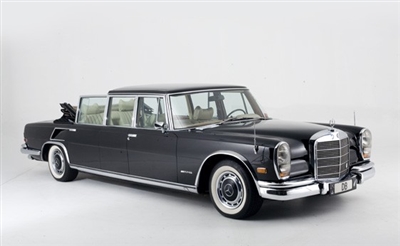 Crayford also did one 600 Pullman conversion (see final picture). Details can be found on this Auction House's website:

- Believed to be the only 600 Pullman converted to Landaulet configuration
- Conversion by Crayford
- Four-door configuration, long wheelbase chassis
- "Number 60 of the 59 built"

A full generation after it was built, the Mercedes-Benz 600 remains an engineering and stylistic masterpiece, as exclusive and visually imposing as ever. In its day, it was a favourite of the world's wealthy and well-connected, used by everyone from Elvis Presley to the Pope. Powered by an all-alloy 6.3-litre 300 bhp V-8 engine, the 600 propelled itself with prodigious acceleration. A comprehensive hydraulic and pneumatic system powered the self-levelling suspension, assisted the brakes, helped open the massive doors and smoothly and silently operated the windows, trunk, seats and sunroof. With characteristic attention to detail, each Mercedes-Benz 600 was to all intents and purposes custom-built. It was available in both 3,200 mm and 3,900 mm wheelbases, the latter of which was available in four- and six-door form as well as a Landaulet.

Whereas production of the "short" wheelbase 600 amounted to 2,190 units, the long-wheelbase cars, known as "Pullmans," are considerably rarer, with only 429 built. Rarest of the 600s was the Pullman Landaulet, of which only 59 cars were produced. Principally the province of popes and potentates, the Landaulet had a collapsible convertible top over the rear passenger compartment. It was available in both four- and six-door versions, of which each could be ordered with a longer convertible top that extended to the middle partition. Custom paint, interior design and special equipment ensured that no two cars were identical.

The 600 we have the pleasure of offering here is particularly unique in that it is believed to the only long wheelbase Pullman ever converted to Landaulet configuration. As such, it is frequently referred to as "number 60 of the 59 built." The conversion was carried out by Crayford in the UK sometime in the early 1980s, just after production of 600s had ceased. Founded in the 1960s, Crayford specialised in all types of body conversions on coupés, saloons and cabriolets, and the workmanship on this particular car is superb. It is finished in characteristic black with a cream leather interior, with opposing seats at the rear.