This newsletter we have information on crash testing, fuel consumption and much more. We also have a bigger than normal list of links for you to check out.

Mercedes-Benz have always been at the fore front of safety innovations, so it is no surprise that  Béla Barényi patented the occupant safety cell in 1951. The patent  was granted on 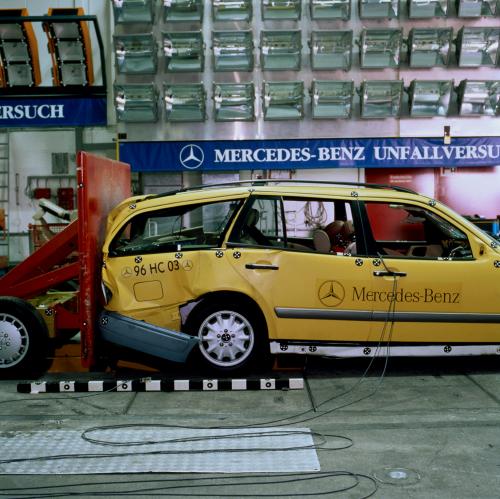 August 28, 1952. The crumple zone premiered in 1953 with the Mercedes-Benz 180, and went on to be included in all other Ponton/Roundie models. The world's first production vehicle with rigid passenger cage and integrated crumple zone are the 1959 W111 fin-tails: Mercedes 220, 220S and 220SE. Since then Mercedes-Benz crash testing has been well documented. I recently came across this website . There are hours of reading and pictures here and it is just one part of a much bigger page that is dedicated to the W163 M Class. Here are a few pages worth checking out:

Hall full of crashed cars.  Or maybe   A movie of a ML crash test. Just click on the link..  What happens when a Smart Car hits an E-class?

And this one that covers all the different crash test scenarios.

The principle may be simple, but it's difficult to construct. It even took Mercedes 10 years, and by 1970 less than 10% of the world's new cars had rigid safety cages integrated with crumple zones.

For those of you who didn't see it on A Current Affair, have a look at this footage. Yes that is a  W211 E320 being demolished by a truck in the same Burnley Tunnel in Melbourne where the terrible crash that killed three people earlier this year. There is quite a story unfolding over the whole incident, click here to see what was going on.

These days fuel consumption is important when choosing a new car, more so if your annual mileage is high. We have two amazing cars for sale at the moment that show just how advanced the current technology is with regard to reducing fuel consumption.

First up is the W203 C220CDI that we have for sale. Two weeks back Murray (Spare parts manager), Colin, our new parts interpreter, and I went to Sydney to visit various suppliers and a few customers.  The trip from my house in Jerrabomberra to Alexandria in Sydney was exactly 300kms and we used 15lts of Diesel!! That's 5lts per 100kms or 57 miles per gallon in the old speak. With the return trip being up hill and much heavier traffic on the M5 carpark the consumption dropped to 5.5lts per 100kms. We did a total of 603kms in 7hrs 15minutes, that's an average speed of 83kmh and used 33.165lts of fuel.

A week later I had to drive out to Braidwood and took the same car.  This time I did 163kms in 1hr 56 minutes, it took 8.64 litres of fuel at 5.3lts per 100kms. Now while this car is a diesel it is no slug. The new CDI engine with their Turbo charged and intercooled induction are wonderful. Yes, they are a little nosier at full acceleration, but cruising at 100kmh I don't think you can tell the difference between the diesel and the petrol 4 cylinder models. However you most certainly would at the fuel pump.

The other car is a 2005 A200 Elegance sedan. This car was recently driven from Albury to Sydney at an average consumption figure of 6lts per 100kms or 47.5 miles per gallon. See below for details of both vehicles.

Want to look like you know what you are doing?? We have for sale a limited amount of Mercedes-Benz dealership overalls and dust coats. See the picture below. Thats Colin on the left and Murray on the right. The overalls are $75.00 a pair and the dust coats are $50.00 each. We also have some used overalls, (some only just used) that will be cheaper again. Give us a ring if you don't understand the sizing system. Ph 1300 787 300.

Sizes available are as follows: 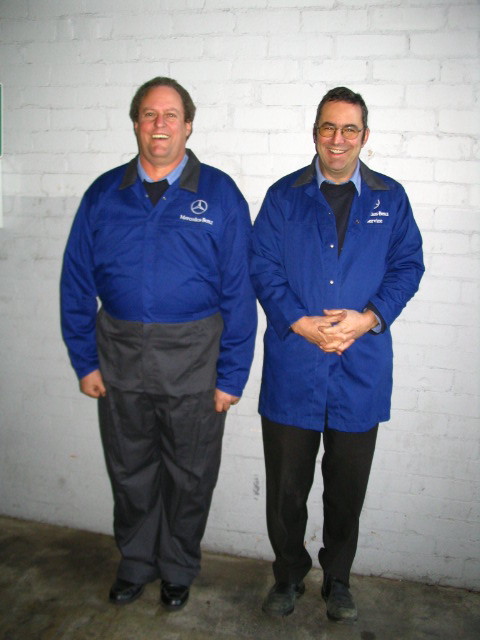 You know those stories of finding a car that has been locked away for years and years?? There was one about a 1960 300SL roadster in the latest copy of the Mercedes-Benz club of the USA magazine and we have one here about a 1953 Type 300 sedan. Have a look at this picture: 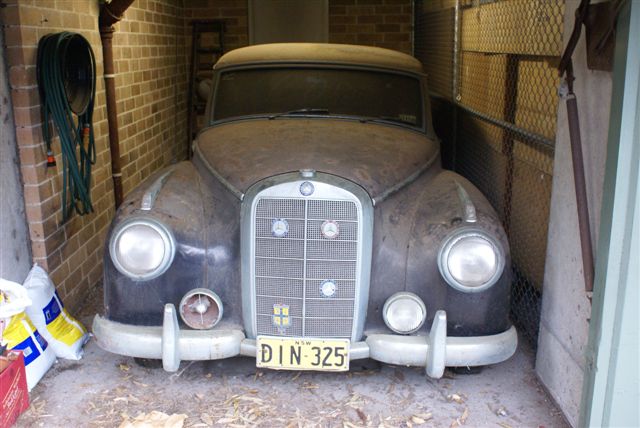 This is the first time this old girl has seen the light of day for 32 years. It was put in this garage under a block of flats in 1975 due to a tailshaft coupling failure. There was even a parking fine for $6.00 still stuck on the windscreen. The fine was for Kent St, so presumably that is where it broke down. It is a two owner car with the first owner being Anthony Hordern. And the original number plate being NSW  41. 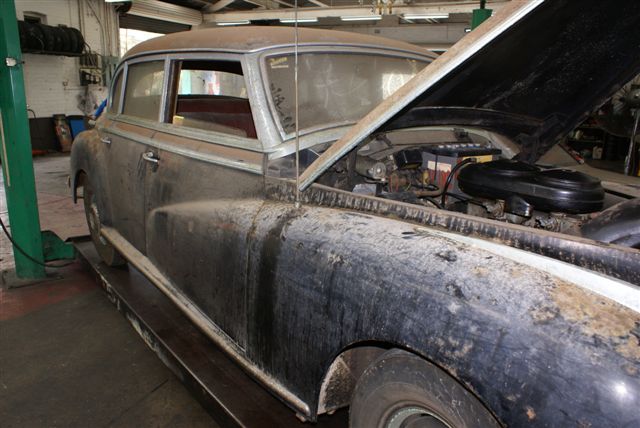 Apart from two of my staff, there was only one newsletter reader who worked it out. Well done to Marc Legovich who worked it out. The car in question is a CW 311 or as it was known later in its life the Isdera Imperator 108i. It was a design study done by Eberhard Schulzin in 1978 based on Mercedes-Benz and Porsche mechanicals. It went into a very limited production with only 30 examples being made. It is interesting to note that apparently old Mr Schulzin, was licensed to put the Mercedes star on his cars. I bet that DaimlerChrysler would not even think about that now......You can find more details and pictures at this:

There is a heap of stuff on the net about them, but much of it is in German. Try a Google search if you want to look further.

Joke of the month.

The following is an actual question given on a University of  Washington chemistry mid-term.  The answer by one student was so "profound"
that the   professor shared  it with colleagues, via the Internet, which is, of course,  why we now have the pleasure of enjoying it as well :
Bonus Question: Is Hell exothermic (gives off heat) or endothermic  (absorbs   heat)?
Most of the students wrote proofs of their beliefs using Boyle's  Law (gas   cools when it expands and heats when it is compressed) or some
variant.
One student, however, wrote the following:
First, we need to know how the mass of Hell is changing in time. So  we need  to know the rate at which souls are moving into Hell and the rate at which   they are leaving. I think that we can safely assume that once a  soul gets to Hell, it will not leave. Therefore, no souls are leaving. As for how many souls are entering Hell, let's look at the different   religions that exist in the world today. Most of these religions  state that   if you are not a member of their religion, you will go to Hell. Since there is more than one of these religions and since people do  not   belong to more than one religion, we can project that all souls go to Hell.
With birth and death rates as they are, we can expect the number of  souls in   Hell to increase exponentially.
Now, we look at the rate of change of the volume in Hell because Boyle's   Law states that in order for the temperature and pressure in Hell to stay the   same, the volume of Hell has to expand proportionately as souls are  added.
This gives two possibilities:
1. If Hell is expanding at a slower rate than the rate at which souls enter   Hell, then the temperature and pressure in Hell will increase until  all Hell   breaks loose.
2. If Hell is expanding at a rate faster than the increase of souls  in Hell,  then the temperature and pressure will drop until Hell freezes over.
So which is it?
If we accept the postulate given to me by Teresa during my Freshman  year   that, "It will be a cold day in Hell before I sleep with you," and  take into   account the fact that I slept with her last night, then number two must be   true, and thus I am sure that Hell is exothermic and has already frozen over.
The corollary of this theory is that since Hell has frozen over, it  follows  that it is not accepting any more souls and is therefore, extinct......leaving only Heaven, thereby proving the existence of  a divine being which explains why, last night, Teresa kept shouting "Oh my  God."
THIS STUDENT RECEIVED THE ONLY "A."

Big pile of stuff to check out this month. Don't forget that if you find something interesting on the net to send me a link to it.

- Check out the Australian Gelanderwagon Owners Association (AGOA) website here. It is rather surprising just how many of these things are here in Australia. Did you know that DaimlerChrysler are trying to talk the Australian Army into a bulk purchase of the current spec G wagon with the ML270 engine in it?? The AGOA is even organizing a rally (or Treffen) to celebrate the 25th anniversary of the G wagon release here in Australia. Click here for details.

- Want to see something scary? Try the "Wayback" machine. Go here and type in your favourite website URL. Have a look at our old site back in 1999... You can also check out a selection of websites from 1996 like Yahoo and Amazon. Can you remember who else started their website in 1996???

- Do you like Long Wheel Base sedans?? Then check out this site with info on many of the Stretched versions of various Mercedes-Benz products. The site is not in English but there are plenty of great pictures to keep you entertained. Check out this W115 with 6 doors. If you would like one of these I have a W114 long wheel base with four doors that it for sale.

- Want to see our Parts Managers car?? Murray owns an excellent 1953 Type 220. And it is currently being featured on the 170/220 Club website in Germany. You can check it out here. This is a great site with lots of excellent pictures to look at. This one of a Type 220 police wagon has Murray interested.

- Interested to see how your car would rate in a crash? Have a look at this page. Covers most models 1990 to current.

More cars have come and gone in the "Pre loved" car department. The immaculate 420SEL is sold, as is the low mileage 320CE cabriolet. It sold within days of the last Newsletter being published. We have also sold the manual W114 280E, the nice 190E and my second Crayford converted W116 280SE wagon. Would you believe that it sold to someone who has another one of these.

The other interesting car we have just got in (picture very soon I promise) is a great little A200. This car was a special order for the wife of a Mercedes-Benz executive and has some great options like rear integrated child seats, rear side airbags, Harmon Karmon sound , interior light package, etc, etc. The updated A class is a great little car and as mentioned above gets exceptional fuel consumption.

So that's it for another newsletter. Hope you liked what you saw. If you have any ideas or want to contribute any articles, pictures or other material please e-mail me here. Also, don't forget that you can check out the old newsletters here
Thanks, John Green.