Welcome to the latest newsletter.  Things have been busy for the last month to say the least. We have had both the long awaited National Rally and the Victorian Club Concours. Both events were great and the reports are in this newsletter. Also we have a follow up on the cruise control story from last month and the other usual articles.

Recently, on the OZVETS forum that we sponsor, the question was asked about what the difference is between a W108 and a W109 sedan? This is a question that we get quite often and also that we hear of people getting the answer wrong for. So here is the answer:

The "L" in the model type signifies LONG (or LANG in German) and it is these versions that many people think are the W109 series. However, this is not quite correct.  The longer wheel base on its own does not make it a W109.  As you can see, there was a 280SEL and a 280SEL 3.5 in the W108 series. What does make it a W109, is the air bag suspension combined with the long wheel base. W108's  had coil springs on all models, even the 300SEb.

The National Rally has now been and gone and it was a fantastic success. 260 adults and 12 children made up of participants from all states of Australia , the United Kingdom, New Zealand and Germany attended the rally in 110 cars. The rally was based at Rydges Hotel on Capital hill where each days touring was based from.

Rally participants were broken up into four different groups, each with a team leader, who then toured Canberra's highlights including:

Calthorpes House, an original 1927 Canberra house, that is truly a frozen piece of time.  It is still furnished at it was before WW2.  This is a shot of the "Red" group at Calthorpes house. 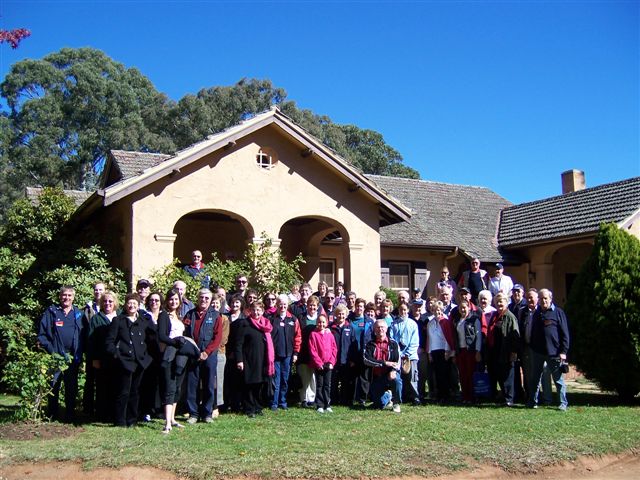 Mt Ainslie lookout. What is absolutely the best view in Canberra.

The Australian Institute of Sport (AIS), just like a University Campus only everyone is very, very fit.

The Tidbinbilla Deep Space Communication Complex, where they track many of NASA's deep space projects like the Rover missions to Mars and the Voyager probes. 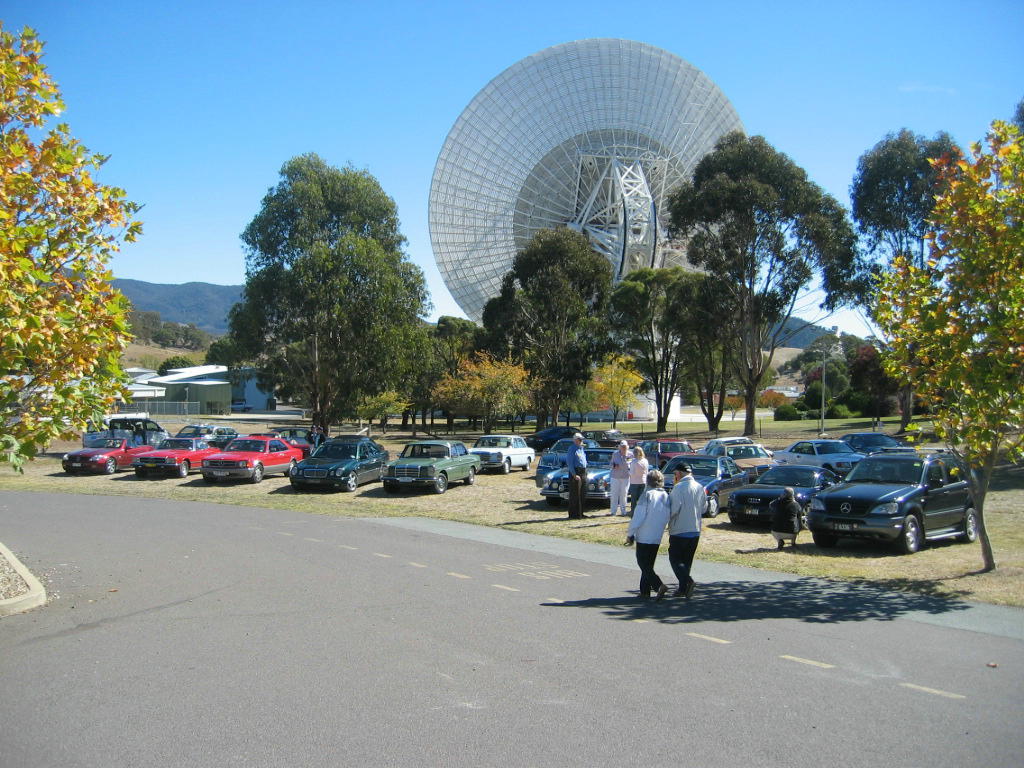 Lanyon Homestead, with buildings dating back to 1850, iis one of the areas original homesteads . Built long before Canberra was even thought of.

On Sunday at lunchtime, all the groups converged on the banks of Lake Burley Griffin to display their cars. This is the same site as the Mercedes-Benz Club of the ACT's annual Concours. The pictures below are of the display. 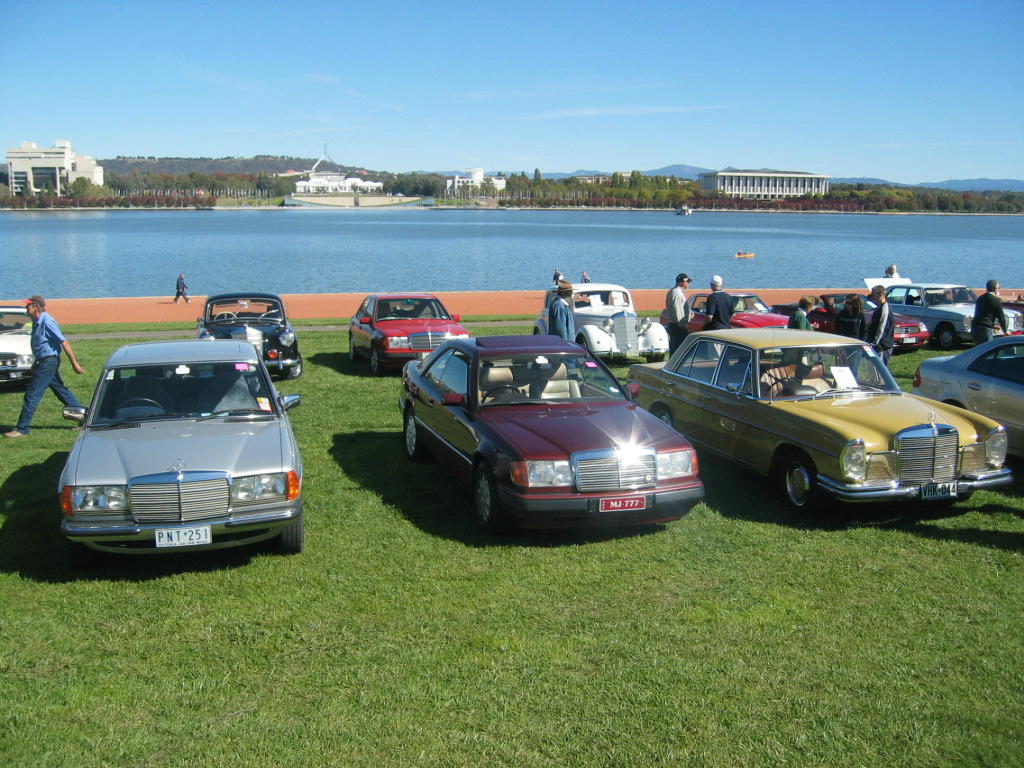 There were also other cars on display that were not attending the rally including Patrick Divine, a member of the Victorian Club, who drove his 300SL Gullwing up for the day! 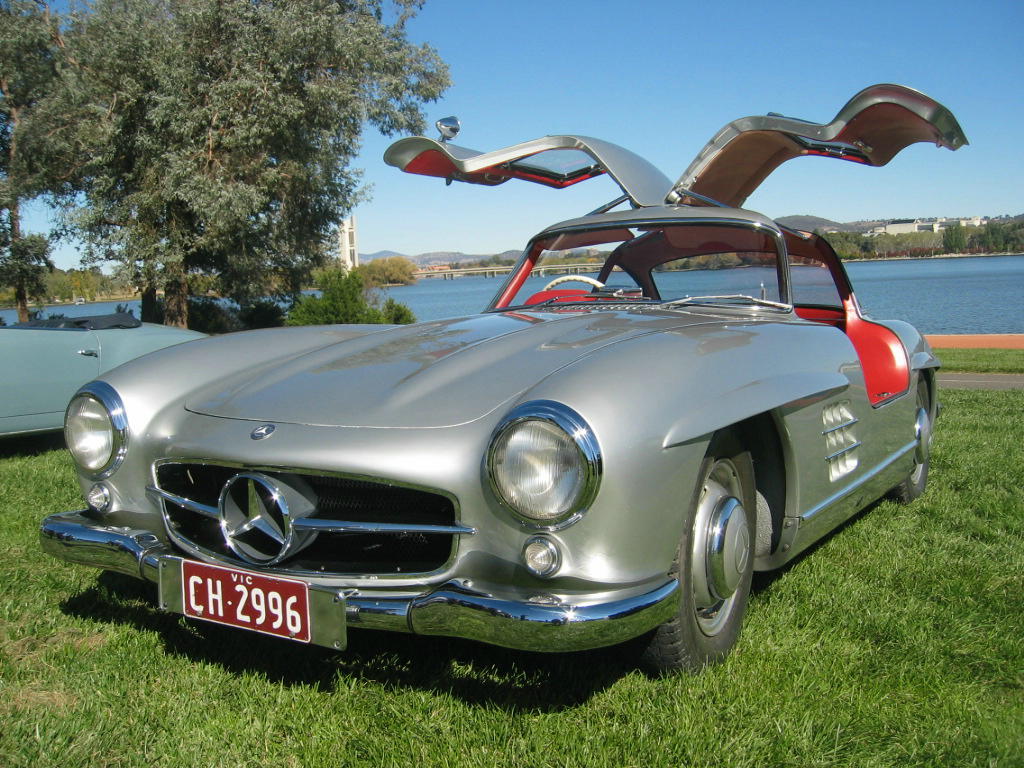 Sunday night was the formal Rally dinner and was held at the National Art Gallery.  At the end of the formal proceedings the Victorian Club, who will be hosting the next rally in April 2008, announced that it will be a touring rally starting in Albury and finishing in Lakes Entrance.  Rally participants will travel the very scenic "Great Alpine Road as well as visiting historic towns like Beechworth and Omeo.

The Rally also had a Pre and Post Rally Tour run by the NSW and Victorian Clubs respectively. The Pre rally toured through Sydney and the Southern Highlands and the Post Rally Tour was from Canberra to Melbourne via the Snowy Mountains, Echuca, Ballarat and the Great Ocean Road. I did not attend either of these tours so can't give you a report. If any of our Newsletter readers did attend and would like to e-mail me a report I would be happy to run it in the June Newsletter.

Hoax of the month (continued).

We received quite a few comments on the Cruise Control story from last month.  However, before I get onto them, I did forget to add another reason why this had to be a hoax e-mail. If you remember back, the dimensions given were in Mph not Kms? Now, Australia went metric in 1974 and there would be very few Police Force members left that trained in imperial units!

Anyway, the best e-mail I received was from Paul Sheehan who pointed me to this link. The final paragraph states:

"Another reason not to forward this chain is the risk of "False Attribution Syndrome" - someone may receive and forward it in the future, adding their name and title, and by extension, undue credibility to the tale. Would you want to start receiving calls and e-mails wanting more information about this danger? If not, break this chain."

Which would lead you to wonder if the Australian author has been set up by someone? I checked to see if there was a "Queensland Mines Rescue Service" and yes there is, but there was no mention of the stated author.....

Murphy drives a Daewoo (a report on the Victorian Club Concours)

Well, everything they say about Melbourne weather is true. Just picture this. Chris Righton (our Service Manager) and I leave sunny Canberra about 1.30pm Friday and head south. The  forecast for the coming Sunday was not good, rain and 16 degrees..... We were both driving separate cars as we both wanted to display them. I was driving my recently completed W116 280SEL wagon (Crayford Conversion) and Chris was driving his W114 280E that used to be my old HRA (Historic Rally Association) race car. Both cars were loaded up with stock for our Trade display on the Sunday. The trip went smoothly until we get 100kms from Melbourne where it starts to rain.... Typical Melbourne! We arrive in the wet and bunk down for the night. 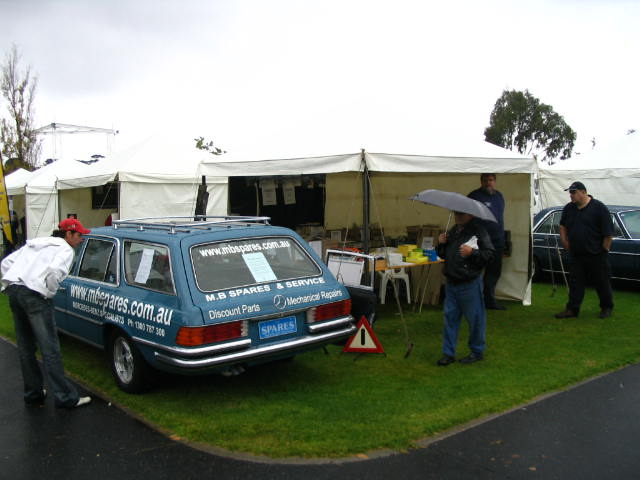 Next day it is still raining when we woke up, but soon cleared. The day was spent cleaning cars that got filthy in the last 100kms of the trip and looking for some green touch up paint for my fathers 1937 W143 230 sedan as it was to be featured as part of a display of "Pre war" models at the Concours.

Sunday morning and it is raining again but very lightly.  We take off at 8.00am hoping to arrive by 8.30am, by the time we get there it has stopped raining and even looks like it might clear! Lucky we booked a tent for our trade display. So we set up, the serious Concours contenders arrive and start the final preening of their cars all ready for judging to start at 10.00am. You will never guess when it started to pour down again, yes 10.01am and persisted for the rest of the day. The timing could not have been better. 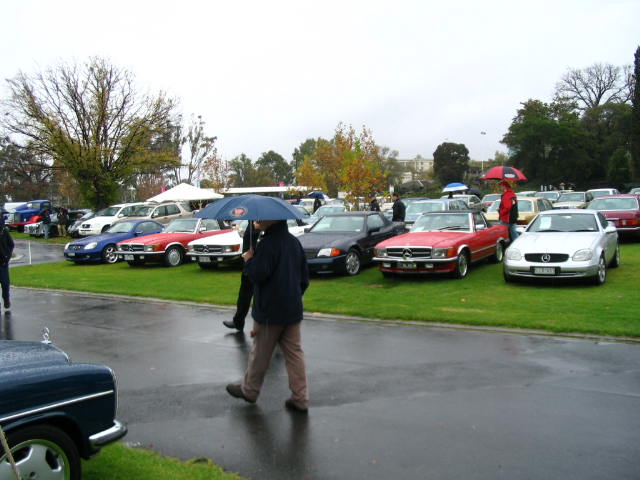 However, Melbournians must be a resilient lot as the Concours all went ahead as planned. Apparently wet weather venues are for sissies. The judging was done and awards handed out with everyone squeezed into the hospitality tent. The two big winners for the day were Anna Dizane who took out all of the following for her GR4: Best Paint, Best Interior, Best Engine Bay, Best Professional Restoration, Champion of Champions and Outright Winner. My father took out Best in Class for Chassis/Pre war models with his W143 230 (glad I found the paint), 1st and 2nd in Class for the Roundie Class  and best Amateur Restoration with his 220SE Roundie Coupe. Congratulations were in order for all winners and in fact everybody that stuck it out for the day. 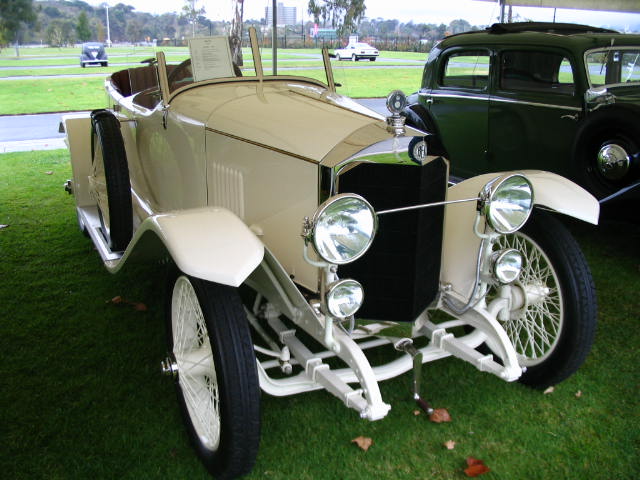 Some of the stand out cars on display included a 1950 Mercedes-Benz Truck, a Brand new S 500 courtesy of DaimlerChrysler, a very rare 170Da with a factory fitted ute body, a 1938 260D cabriolet, two 300SL Gullwings and a 300SL Roadster (with its roof up!) 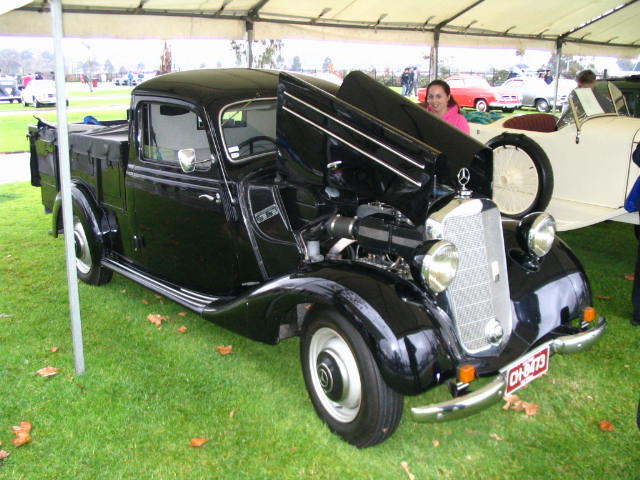 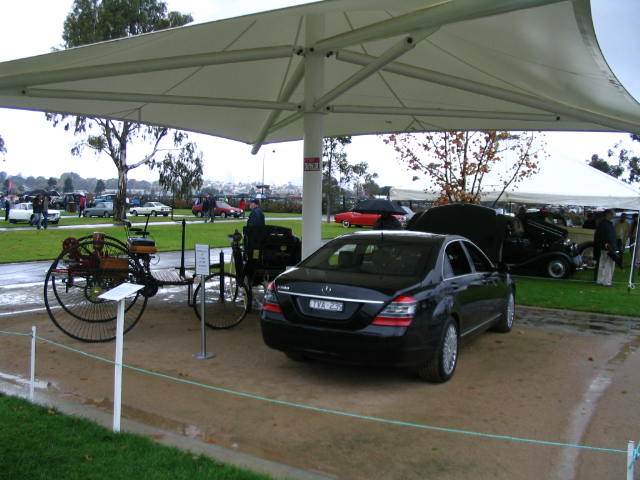 Monday morning we had a few business appointments to keep before heading back (didn't care if it rained this time). One of these was the new workshop for the Lindsay Fox collection of cars. I will do a feature article on the 300SL Roadster that they have recently commenced work on in the next Newsletter.

Cars in this month for dismantling include the following:

W114 280E 1975 model, nice car but with a bad loss of compression on one cylinder and a noisy diff. Has a near perfect dashboard which is a rare thing these days.

W107 350SLC  1973 model, this was a beautiful car until some sod decided to set it on fire! Damage is restricted to the passenger seat as it was extinguished quickly. There are a lot of great parts on this car.

If you are interested in parts from any of these cars please contact our Spare parts department toll free on 1300 787 300 or by e-mail to spares@mbspares.com.au

- Want to check out the worlds largest online Mercedes-Benz SL community? Well you need to click here. Our SL is a huge site with heaps of interesting reading for lovers of all Mercedes-Benz models, not just SL owners. However, of particular interest to SL owners will be their research archive which is still being developed. You can check out a sample of it here. Australian SL owners need to remember that most of this information is for US spec cars. They also have a monthly newsletter that you can subscribe to.

- The 300SL Roadster is 50 years old next year and Mercedes-Benz have a special version of the current SL to celebrate this. Click here to check it out. No news yet if it will be available in Australia or even in RHD.

- Ever wondered how to tell if your Mercedes is a Diesel? Well thanks to Hans Kruger on the OZVETS forum you can now find out by clicking here.

New cars into stock include the E300 diesel I spoke about in the last Newsletter. It is a '99 model and is a great car to drive. These late model diesels produce more torque than you realise and are amazingly smooth in there acceleration. The other exciting car that I know is for sale, is a 230SL Roadster that belongs to a customer of ours. This car has been serviced by us for some time and is an excellent example. If you have been dreaming of owning a 230SL give me a ring on 0419 259 458 or e-mail me.

Sales have been a little slow in the last month especially compared to the preceding months, so if you are interested in any of the cars we have in stock, now is the time to talk a deal with us.

If what you are dreaming of owning is not here then please feel free to contact me on 0419 295 458 and I will see what we can do to find you what you want.

You can check out all our cars for sale here:


So that's it for another newsletter. Hope you liked what you saw. If you have any ideas or want to contribute any articles, pictures or other material please e-mail me here. Also, don't forget that you can check out the old newsletters here
Thanks, John Green.