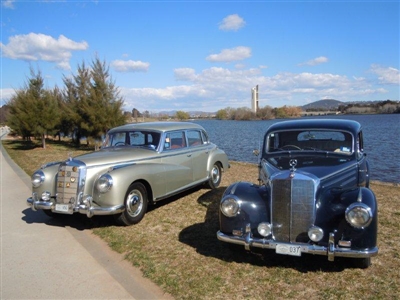 Since launching our Facebook pagejust over a month ago we have had a great response. Where possible we have been updating it with info and photos showing the daily workings of MB Spares. It is a public page so you don't need to be a Facebook member to check in and see the pictures. One of the pictures was taken on the shore of Lake Burley Griffin and will be featured in an upcoming Calendar we will be doing in conjunction with the Mercedes-Benz Club of the ACT. It is the top picture in the right hand margin of this Newsletter. Just click to see full size and click again to reduce.

Mercedes-Benz Club of the ACT Concours.

The Mercedes-Benz club of the ACT will be holding its 37thAnnual Concours on the 23rd of September 2012. Last Newsletter we advised the location as being the same as last year, but due to the Patrick White Lawns area being renovated the Concourse and The Shannon's German Car day has been moved the Treasury Building Car park. You can access the area from Langton Crescent Parkes. ( click on link to see map)

There have been rumors of this for some time, but it is now official. In 2013 the Three pointed star will line up on the Starting grid for the V8 supercar championship. Erebus Motorsport who already run the SLS here in Australia in the Sports car class has directly funded AMG/HWA's development of a V8SC-spec engine for the E-Class. The engine is essentially a de-stroked 5.0-litre version of the 6.2-litre GT3-spec V8 which powers the SLS racecar. Even Herr Aufrecht (the A in AMG) is involved with the engine development, so this should be a very interesting development. In what is a rather odd move Mercedes-Benz Australia are not backing the move and seem to have distanced themselves from the operation. I bet their attitude changes if/when the podium finishes start to rack up… You can read all the details here.

As usual lots of cars coming and going in the dismantling section. We even managed to get a great shot of a flying Mercedes when the scrap metal merchants were picking up the wrecks a few weeks back (see right margin) Some highlights are as follows:

-W108 280S, bad front damage, but it is a floor change manual (yes another one), so this car would be the ideal donor car for someone wanting to convert their 6 cylinder W108 to a manual. As with any conversion it is always easier to buy a complete car rather than all the bits individually.

In come the dollars and in come the cents, to replace the pounds and the shillings and the pence.

Every now and then you come across something that is a great reminder of the past. We have recently purchased a 1966 250SE from the son of the original owner. It has travelled only 67000miles and came with two very interesting bits of history. The first one was the original sales receipt where the balance owing is made out in Dollars and Pounds. With the change to decimal currency being in February 1966 it goes to show that some people were still struggling with the conversion in September 1966. It also shows that to get a R/H external mirror back in 1966 you had to pay an extra $10.00. No doubt quite a sum of money back then…. A copy of the receipt can be found here.You will also see that there was a trade in. It was an early 60's 220SEb and before that they owned a 180D Ponton.

The other great piece of history that came with the car was a collection of Mercedes-Benz calendars from 1964-82 inclusive. Each one still wrapped in tissue paper and in the original box. Looking though these is a very interesting walk through history with Mercedes-Benz following the trends of the times. See the photo on the right for an example of the 197? Calendar….

Some of these are now being duplicated off our Facebook page so apologies to those of you who have seen these before.

- Interesting clearing auction in the USA, someone with a liking to Diesel MB wagons.

- And finally the Wikipedia articles onKarl BenzandGottlieb Daimler. It is interesting, especially in Daimlers article to see that politics and other issues with running a big business were just as big an issue back then…

In the last few Newsletters we have been looking for more staff and in last newsletter we announced that we had found almost by accident a potential apprentice. Well this Newsletter we can announce the appointment of Derek Watt to our workshop staff. Derek and his family have recently emigrated from Scotland (he does have a wee accent) where his last job was working for a Classic Car Hire company maintaining a stable of 25 Classic and contemporary models ranging from an E-type Jaguar to aFerrari 550 Maranello and including several very desirable classic Mercedes-Benz models.

There are always plenty of events on across Australia for Mercedes-Benz owners. Here are a few to put in your diary:

18thof November 2012. Marques in the ParkMBCACT

Filters that nobody changes.

The latest in our series of unknown filters is a very simple one. Nearly all petrol models from 1976 onwards have a very small filter hidden inside a fitting on the fuel divide or fuel rail. We have seen quite a few cars where the original filter is still there. We even know of an engine that was rebuilt due to lack of power, only to find that when don it was better, but still lacked power. When this filter starts to block the fuel pressures can read normal, but there is an issue with flow.

It is designed to catch any flakes of crud that come off the fuel lines over the years. The sulfur content in fuel eventually lines the fuel lines and it is possible for flakes to fall off and you do not want them and anything else winding up in your injectors. They are very cheap at $ Each…

Remember the E280CDI that sold in a flash?? Well we have another one that has just come into stock. It is also an 2005 model only this time in Elegance spec in Brilliant Silver with Black Leather and Burled Walnut interior. If you are keen to own one of these you find details of it here..

Other cars also new into stock is a rare 250SE sedan with a floor change manual transmission. This is a rather an odd occurrence with floor change being quite rare on the earlier models and then we get two in two months..

Cars sold in the last month include the stunning 6.3 the 220SEB with factory floor change manual and our beautiful 190Db which has gone back to Victoria.

Here is a list of the other cars currently for sale, including a rather surprising one….

Each one has its location listed with some here in Canberra and the others with an associate of ours in Sydney. If you are interested in any information please feel free toe-mail usor contact the mobile number on the cars listing.

So that's all for now. We look forward to seeing many of you at the ACT club Concours, and for those of you who can't attend we will have pictures in the October Newsletter.