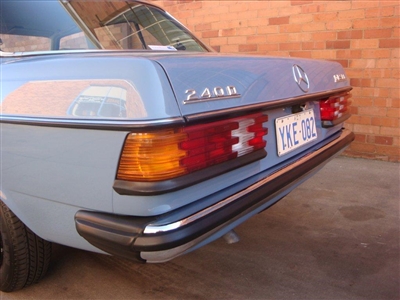 In 2010 we were lucky enough to purchase this stunning 240D from the original owner. It has travelled 141000kms from new with an amazingly documented history.

It was ordered by an Australian diplomat in Portugal, then delivered new in Stutgart and shipped to San Fransico as his posting was changed, after a few years he moved back to Australia and it has been in Canberra ever since.

The document file that came with the car included all of the coresnpondence to buy the car, the shipping papers from both sea vouages and all the service records for the car.

We carried out a very light preservation execise with it and displayed it at the Mercedes-Benz club of the ACT Concours in September 2010 where it won best in class.

The car has since been sold to a new caretaker who will continue to preserve it as a record of what a good W123 looks like.