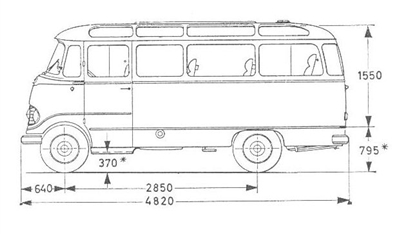 The O319 is a small bus (or coach) available in a number of seating configurations, each with a number of different specifications or options. Mercedes-Benz would build these to order with a very large number of available options, but basically they came in 10, 17 and 18 seat versions. They were produced from 1956 -67.

Of all the O319's made, reportedly only 961 of them were the 10 seat Luxury version. Most original owners of these were Motels, Airlines or big business's. The luxury version was equipped with 10 "aircraft style" reclining seats, panorama windows and a full length Webasto roof amongst other options. In their day they were the ultimate people mover.

Unfortunately very few survive these days. One theory for them not surviving is that, as many were brought by Motels and Airlines, they would have all been traded on the newer model in the late 60's/early 70's as they all wanted the latest model to keep up with each other. As a result of this, most of them wound up on the used bus market in the early 70's. Now apparently these 10 seat Luxury versions did not sell well as a used bus. The market for used small buses was strong for the 17/18 seat version as these could be used as school buses or route busses. But the market for used 10 seat versions was very poor. Obviously 17 paying customers is better than 10!

So what happened to all of them, well the word is that the seats were taken out and they were just sold as plain vans or converted to campervans. Many of the European based examples rusted away and there are very few left today. We only know of five examples, maybe there are more. One of which is owned by the Mercedes-Benz Classic Center in Germany. You can find details of the known examples in the MB Spares registry (see link in L/H ,margin)

This example was built in 1966 and purchased New in Germany by Bernard Dowd who owned Hickory (ladies under garment clothing) here in Australia It was used for a number of family trips to Europe (he had six children) and then brought it back to Australia in 1968. The log books show the first two services being carried out at a Mercedes-Benz dealership in Stuttgart. It was first registered in Australia on the 1stof November 1968.The Dowd family used it to take their kids for summer holidays in Queensland (the chauffer drove it) and to ferry them from their house in Toorak to the weekend house on the Mornington Peninsula .

Since then it has had five different documented owners including myself. In 1981 the middle row of seats was replaced with a table reducing the seating capacity to 8 so the vehicle could be classified for private usage and thus a lower registration fee. The middle row originally was a set of two seats on the l/h side and a single seat on the r/h side. The double seats were not lost, but unfortunately the single seat was lost.

In 1997 when a friend of mine saw it advertised in the Melbourne Age. He documented its condition at the time by pictures. It was basically complete and original including all the seats, (with the exception of the single seat) and the full length sunroof. However it was purchased by someone who didn't know what it was and attempted to convert it to a Campervan. The chequer plate trim and wide wheels were also added by him.

I purchased it in November 2004 with many parts missing including the parts for the Webasto roof, which had been covered over with the top of a Mazda Bongo van! Luckily the rails in the roof where the sunroof mounts were not damaged. I have since sourced all the parts required to restore it from around the world. This includes the parts, materials and drawings required to replace the lost seats. The bull bar and lower side cladding has since been removed. I have also fitted the correct wheels and new tyres. If interested a full list of the NEW genuine MB parts that I have purchased can be forwarded to you. It alone would be worth over $10000.00 AUD.

We have manage to find a full set of mint condition Mercedes-Benz dealership parts manuals which we have had digitally copied and then rebound. We have since supplied copies of this important document to many O319 and L319 owners worldwide.

It has travelled only 62295mls from new and whilst it looks dreadful it is mechanically excellent, with very little wear. In 2005 we carried out a mechanical restoration including a brake system overhaul, reconditioned carburettor, new waterpump, the wheels and tyres mentioned above and many other jobs. We have the original log books and a full set of workshop manuals for it.

The biggest asset of this vehicle is the condition of the body. Removing the chequer plate on the sides revealed NO RUST. There are however a lot of holes where the pop rivets were that held the chequer plate on, this is a much easier repair when you look at some of the O319's being restored in Europe. The remaining panels are rust free and surprisingly straight. For whatever reason the previous owner chopped into the l/h/f guard to allow for clearance of the fat tyres he fitted. Obviously he realised this was not required as he did not chop away at the r/h side. He did however rivet more chequer plate to the front edge of the r/h guard. You can see in the list of parts we have collected is a NOS r/h guard to use to repair this damage. The l/h guard would have to have a panel made up to repair it as we have scored the world trying to find a NOS guard and they just do not exist.

Whilst we have managed to get most parts required there are a few that we have not tracked down yet. Here is what we know is missing:

- The alloy moulds for the rubber bump strips that were an option on the bumpers. There is a set of rear ones, but it would look silly with only the rear ones fitted.

The 1966-67 model was the most desirable Benzine version with the engine upgraded from 1.9lt to 2.0lt (74 - 90HP) and the brakes were upgraded to the twin booster system.

- Roof rack with fold down ladder

- Canvas cover for the roof rack

It is not every day that a 10 seat version of the O319 comes onto the market, so calculating a sale price is difficult. There are several well restored examples of the 17 seat version that have sold recently for over €70000,00 and the last known sale of a restored 10 seat version was well over 5 years ago at a considerably higher price.

We would therefore invite collectors with a serious interest in the vehicle to contact us to discuss its value.

Good question. The very short version is things change. The longer version involves me having a heart attack in 2007, buying a Motorhome and needing the space…

With there being every chance that this will leave Australia we are very happy to assist with shipping agents and can arrange transport to Port Botany in Sydney along with the safe packing of all the parts associated with this vehicle.