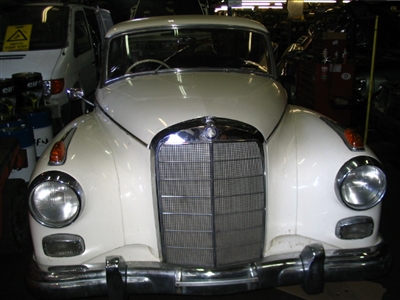 This vehicle has been sold, but as it is a very interesting model, we are leaving the details on the site. It is currently being restored by our workshop for the new owner..

Here is a rare opportunity to purchase a very collectable 300d limousine Below is documented the known history of this car and the model in general. I have also included some brief specifications on the model. To view the pictures to the left and at the base of the page please click on them.

History of the car:� This car delivered and sold in 1959, we think in Sydney. The service books indicate a prefect service history up until where the book ends at 68500miles in 1968. All the stamps are from Mercedes-Benz Sydney, who later became York Motors.

There is a second log book also with York Motors stamps with history up until 1969, followed by a series of undated stamps from Bram Townsend Motors (also an authorised dealer) finishing at 134000miles. The current odometer reading is 41291 miles. As these cars are fitted with a 5 didgit odometer my guess would be 241291 miles.

Condition: This car has not been on the road for some time, but has been well stored. At some time the leather, timber and carpet were all redone to a very high standard and and still in great condition.

The body is very solid and most significantly has no structural rust especially in the large channels that attach the body to the chassis. It appears to have been painted some time back and whilst it is basically OK it could do with another respray.

Now the bad news! The engine is seized so we have not driven the car. We have (and still are) worked on freeing it up but have had no success. Engine parts for these are available and it is possible to get used M189 engines from the W108 and W109 300SE's as they are basically the same engine.

History of the model: �The 300 Limousine was Daimler-Benz's Flagship from 1951-1962,� is known by many names.� In Germany, it became associated with Dr. Conrad Adenauer, who was the Chancellor of West Germany at the time, he often appeared in one of six 300 limousines owned by the West German government.� Thus, in some circles the car is known as the "Adenauer", or affectionately as the "Adi". There are four different generations of the 300 series. These are called 300, 300b, 300c and 300d respectively. The 300d was built from 1958-62 and was by far the best of the four variants. It can standard with Bosch mechanical injection and Automatic transmission. There were 3077 300d sedans made of which 607 were made in 1959. The exact numbers for RHD are not available however there were very few.