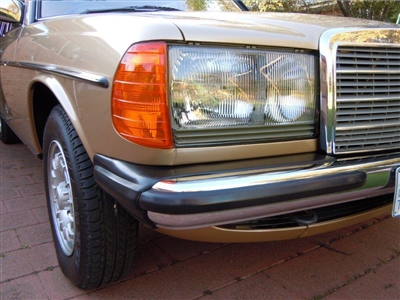 In 2010 we entered a W123 240D in the Mercedes-Benz Club of the ACT Concours and were rewarded with a class award for best W123 series car. You can see pictures of the 240D here.

However, in 2011 we went one better entering this W123 230E and winning the outright award. The car is a 1984 model that has spent all its life here in Canberra. The first owner was the Indonesian Embassy, from there it had two other owners with the third owner buying it in in 1997 with only 16000kms on the odometer.

We are the fourth owner of this very unique example. The cool dry climate of the ACT has helped to preserve this amazing example of Stuttgart's finest. At the 2011 Concouse it won the following awards:

This was from a field of 75 excellent examples of the marque. Below is a series of images along with some history of the car and the preparations we made to present it at the Concours.